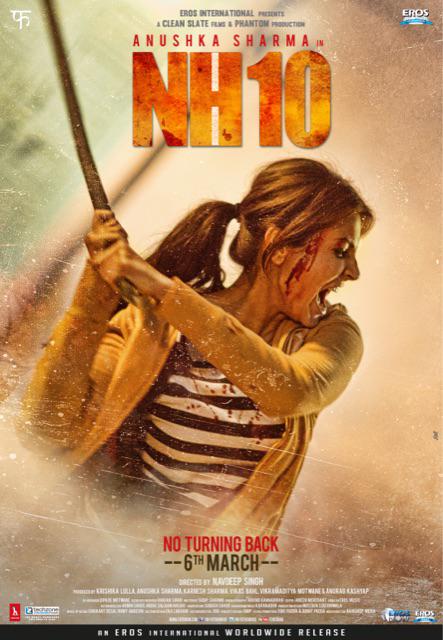 Thrillers are, in my opinion, the most difficult genre of all. A good thriller has to be taut, tense, and constantly edge of the seat. Hindi filmmakers do not churn out many thrillers, and I’m not talking of the Abbas Mastan type popcorn thriller cinema (which is enjoyable as well, in its own way). I’m talking dark, edgy, no-holds barred, unapologetic. I’m talking NH10.

As I sit through Navdeep Singh’s latest, I recall Manorama Six Feet Under, which was striking, both as a debut venture and of course, Abhay Deol. This one has Anushka Sharma as the protagonist and producer. And does she deliver on both counts!  The movie gets straight to the point…within 10 minutes we are on this road trip that we know is going to turn bad. And when it does, a roller coaster ride ensues. Not many twists and turns, and thats the beauty of it. The script unfolds in a linear fashion, and yet holds your attention in every frame. Its like when in childhood, playing the usual cop-n-thief routine, one would run with the ‘cop’ snapping at your heels…you feel the tension, you can feel them catching up, within a hair’s breadth…

What’s noteworthy is that the director takes up the issue of atrocities on women in Haryana and brings it within sniffing distance of our national capital (which isn’t the best place for women anyway). The scene where Anushka, an ordinary middle-class citizen, is advised to purchase a gun for her safety makes one sit up and realize the fact that this is an issue that has to be tackled immediately.

The background score does its part in maintaining the tense atmosphere, and lets the actors do the rest. Anushka is the man of the movie, and wears the pants literally and metaphorically. A strong undercurrent of misogyny runs throughout, from the snide remarks by her male colleagues to the obscene graffiti on the doors of the highway restrooms, and the protagonist deals with it very subtly, yet firmly. A welcome change from the screaming from the rooftops kind of reaction.

Neel Bhoopalam is there to fill in the space, and doesn’t have much of a role. Darshan Kumar and Ravi Jhankal excel in their roles as the main villains . But its Anushka who takes the cake, and the bakery. She lends a lot of spunk to the already well-written character, and there are scenes where one can’t help but clap.

The captain of the ship steers his second venture deftly, leaving us to wonder why he has made just two movies in seven years. Surely he should make many many more.

I had my deja-vu moments during the show, remembering another director who could serve up such fantastic fare in his heydays (cough cough Ram Gopal Verma). Sadly, that went into overkill mode fast enough.

NH10 brings back not only those memories, but much much more. Did you like Badlapur? This is Badlapur on steroids.