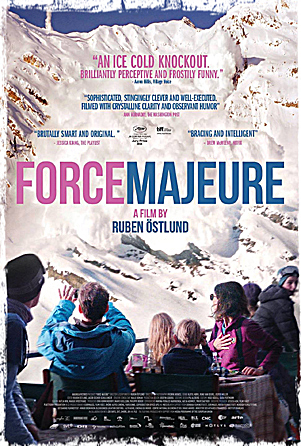 I admit that my closest brush with Swedish cinema has been The Girl with the Dragon Tattoo. The buzz around Force Majeure had been exceptional, and it nearly made it into the top 5 at the Oscar nominations for best foreign language film…and so I got down to it.

A family – man (Tomas), wife and two kids – out on a ski slope in France for a vacation. Picturesque setting, beautiful slopes and all is well. When an unusual daytime blast produces a controlled avalanche, everyone watches the spectacle. But then it seems that the avalanche will cover the patio…and Tomas runs away, leaving his wife and children behind as a white cloud engulfs the terrified vacationers.

The avalanche doesn’t do much damage though…except in the lives of Tomas and his family. He refuses to accept his cowardice…and his wife cannot come to terms with it. The children bear the brunt of this tension.  A strong undercurrent prevails throughout the movie…where words not said hurt more than the actions that caused them.

Force majeure – an irrésistible force of nature. Can also mean a strong sense of self-preservation, of survival. The movie takes a close look at this instinct, and tries to open up a debate on conventional heroism and family values. The director Ruben Östlund makes ample use of pauses and spirited music, to convey the conflicts in the characters and situations they face. A lot of dialogue as well, questions raised on convention and marriage. And many answers too…

The cast is first rate, although quite unknown to me. The children have been cast well, and played their part to perfection. The natural canvas of the setting (in a ski resort) makes the movie look beautiful. At two hours though, it is a bit long. And I loved the background music.

Do watch it, with family. Because its about you. And them. At the end of it…a hug would be in order.