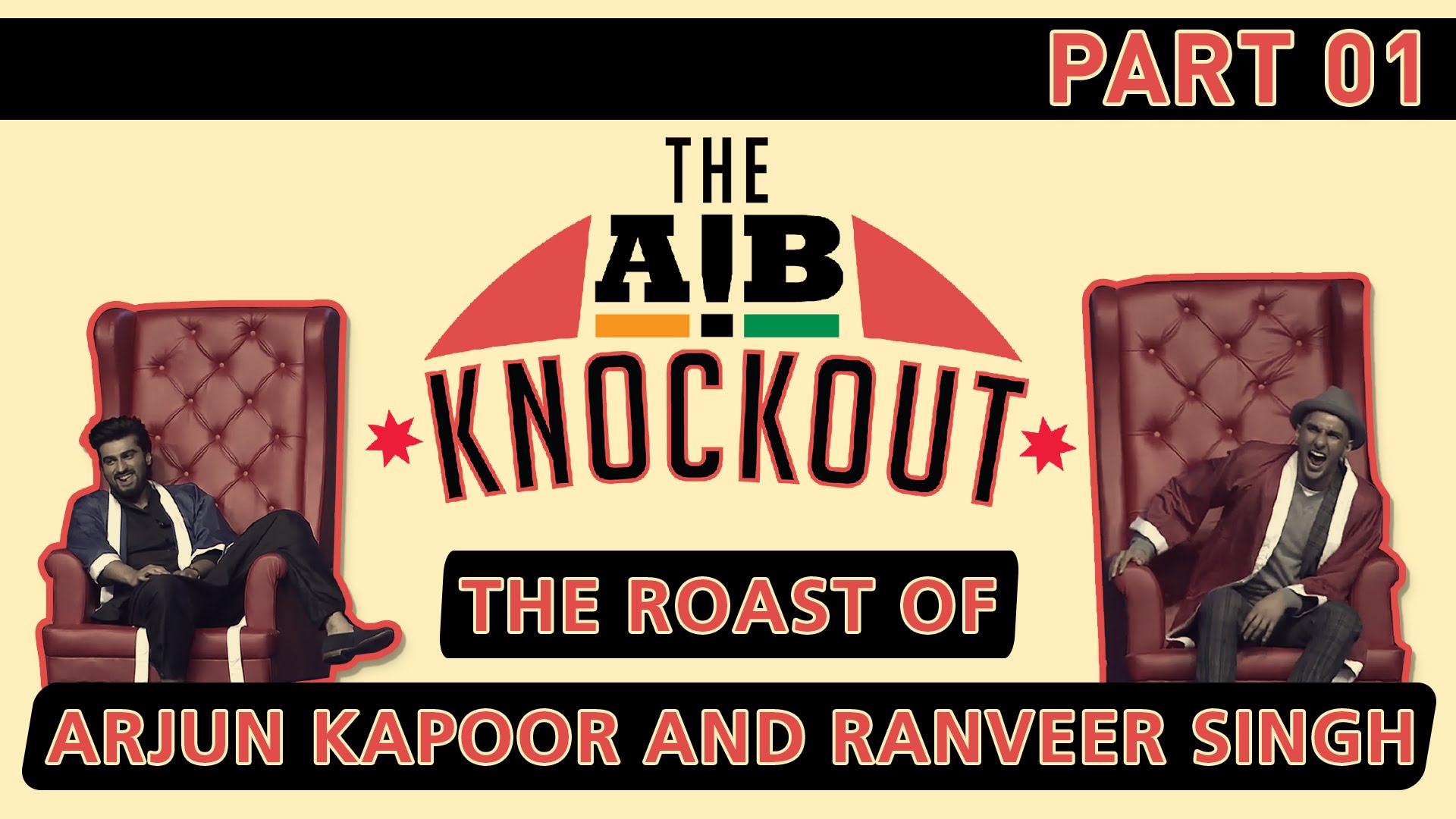 A lot is being made of the  AIB Knockout: The Roast of Ranveer SIngh and Arjun Kapoor,  that was premiered on You Tube on 28th January. For the uninitiated, AIB (All India Bakchod for short) is a comedy shorts You Tube channel that has acquired quite a fan following due to their innovative and funny takes on real life situations ( Honest Diwali ) and celebrities ( Arvind Kejriwal and Aliaa Bhatt). The Roast is a new concept that they are bringing in, presumably the first of a series.

I understand that the concept of roasting is the opposite of toasting, where a roaster ( or roasters) trash a ‘roastee’ (or roastees) in a no-holds barred verbal slingfest.  Bear in mind that nothing is off-limits, and hence a whole lot of bawdy jokes and wisecracks are made at the ‘roastee’s’ expense. And the roastee takes it all in good spirit, sometimes even returning the favour.

What I didn’t know was that they mostly had to be crass and always politically incorrect.  The AIB Roast was just that – funny in places; I did enjoy the occasional witty liners, but when the joke invariably landed up at Karan Johar’s gayness or Shakya’s ‘blackness’ every single time, I started lamenting on the dearth of actual humour.  Ranveer Singh (a big fan me is) even went so far as to comment on Abhish Mathew’s parents sexual positions, which I particularly found very crass and in bad taste. While America does have ‘yo mamma’ jokes that they don’t feel offended about, I don’t know if India is, or ever will be, ready for that brand of humour yet.

Frankly, after a while, it went from jokes to pseudo reality, with Karan Johar (his mom in attendance, wonder what she thought) making up for all those years in the closet. I wonder if they realized that we (cough cough) knew all along 😐 The online audience too, I suspect, was not too impressed, going by the fact that the three parts of the Roast video had declining views, with the first part scoring robustly and the second and third parts progressively attracting lesser viewers.

Being a sport is not equal to laughing at unfunny jokes…for that we have Rahul Gandhi. Nor am I against adult humour. Just that it shouldn’t be forced and laced with choice expletives as the main ingredient, coz that ain’t funny after a while. AIB has done some genuinely hilarious stuff before, and I have rolled in the aisles (of my home) holding my tummy,face contorted..laughing senseless. This roast, sadly enough, was just too well-done for my taste.

Genuine humour? Try Faking News or The Unreal Times…guaranteed to make to roll in laughter. For the rest, get f**k*n roasted, you mother f*k*in ch**ts…..that line didn’t really make you laugh now did it? My point exactly…