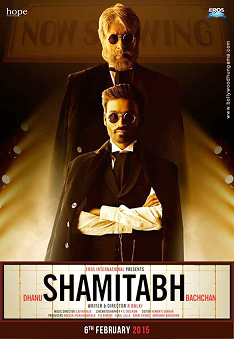 What if you were born to be an actor…but didn’t have a voice?

What if you had the voice…but little else?

R. Balki is known to be a fan of Amitabh Bachchan (Cheeni Kum, Paa) and this film is no different. Amitabh’s towering presence fills most of the frames of Shamitabh, and his voice fills in even the rest of them. The premise is novel, and excitingly different. Dhanush, who made a big splash in Ranjhanaa, is back in his second Hindi venture and boy, the guy can act! I’ve seen his Tamil movies, and Dhanush has carved his own niche there as well. Shamitabh in a sense is semi-biographical…it revolves around the protagonists’ USPs – Amitabh’s voice and Dhanush’s dismissive looks.

Shamitabh is about a dumb, yet aspiring actor, who lives and breathes cinema, but cannot find work in Bollywood for obvious reasons. Enter Akshara Hassan, an assistant director, who sees his talent and tries to promote him, but who wants an actor who cant speak?? A quirk of fate find them Amitabh, a drunk with the voice that stirs a nation. So we have the complete package – the fabulous actor with his new found voice. How their respective egos threaten this arrangement forms the rest of the film.

Performances? Well I don’t need to state the obvious – Amitabh is pure genius, in the role of a drunk that he has performed after quite a while now. Akshara Hassan makes a quiet debut…don’t know how she would manage to fit into another movie but this one is fine. There is not much supporting cast to speak of. Dhanush shows us why he is still in movies in spite of highly unconventional looks and the body of a wiry teenager.

The movie held great promise, but is slightly dented by the screenplay (dragging at places) and the over-indulgence of the director as far as Amitabh is concerned. In some cases, looks like a fan video. A one time watch, unlike Cheeni Kum.

There are scenes in the movie where Amitabh keeps telling Dhanush that he (Amit) is whiskey and Dhanush is water, and hence Amit is more important. Akshara corrects him later, stating that Whiskey has 43% alcohol but the rest 57% is water, and they have to mix to be the best….The movie does play out similarly. Amitabh is the whiskey, but Dhanush with his 57% water steals the show 🙂

Watch it for them.