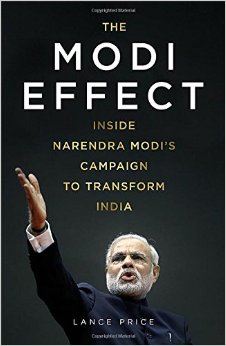 I didn’t hear about this book while it was being written (I don’t think many people did), but when the story broke, it was quite close to the release of the book. The snippets that appeared in the media more than whetted my appetite and I grabbed the book when it finally was available.

So was it good?

Let me start at the beginning with a disclaimer. I am an ardent fan of Narendra Modi. I closely followed every aspect of this election, and the period of two years leading up to the culmination. This journey was amazing to those who believed, and intriguing to those who didn’t. Whatever was your emotion, the fact is that you were not unaffected. And that is why this book is significant. There was another (by Rajdeep Sardesai, the review of which you can read at https://shihanspeaks.wordpress.com/20…) but that was by an observer. This book was by a person who was given unprecedented access to the goings-on behind the scenes. Big difference. And it shows.

Lance Price does well by indicating very early on into the book that he isn’t a fan of Modi politics and in fact wouldn’t have voted for him if he was eligible. This lends credibility to his observations, which are not partisan or pre-judged, as most Indian journalists would have been. The book reads as an interesting commentary, peppered by observations from the subject himself. In between, the book does get a bit too descriptive, especially when Price takes time out to explain the mechanics to the non-Indian readers. There is very little on Rahul Gandhi and Kejriwal, but thats understandable given the fact that this book was intended to be about the Modi campaign.

As i neared the end, I found myself yearning for more…more sound bites from Modi, more experiences during that grueling campaign. A huge shortcoming of the book is that Price wasn’t able to get an audience with Amit Shah, and thats like reading Sherlock Holmes without Dr. Watson. Amit Shah was THE man who brought in the victory, and if I was Price, I would have moved heaven, earth and Modi to get him to speak.

Nevertheless, this book is more enjoyable that Sardesai’s, which was an armchair account of the elections. However, a one time read. If you want more Modi, suggest you switch on your television and sit back, coz the man is everywhere. All the time. Everytime. Just like he was during the Indian Elections. And judging from the people’s reactions, we are still loving it.

2 thoughts on “The Modi Effect – by Lance Price – My thoughts…”