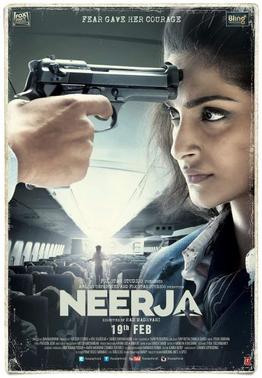 I had been eager to watch Neerja, from the time the first trailers came out a little more than a month ago. The premise was interesting, the story largely forgotten, but intriguing nevertheless…and Sonam Kapoor playing the protagonist. Not my absolutely favorite actress ( or should i say actor, to be politically correct). However, having observed cabin crew from close quarters lately, I was interested to see how the director Ram Madhvani would handle this subject…more on that later.

A bit on cabin crew. Largely perceived as a job that requires little skill other than looking pretty (a point spelt out by Neerja’s ex-husband in the movie), cabin crew often find themselves being judged unfairly, much like persons who work in the contact centre industry. The reality is that this is one hard job, that comes with irregular hours making body clocks go haywire, having to deal with propositions from strangers and friends alike, and requiring a high level of patience and calmness that can be tested to limits. The movie does touch the surface of the realities of this job, and doesn’t go deeper than it needs to.

Back to the movie. Opening with a short peak into Neerja’s family, we find ourselves on the plane within the first 10-15 minutes. Two stories run in parallel, and in contrast – Neerja preparing for her first flight as head purser, and the terrorists preparing for the assault. In fact, a lot of sections of the movie have two stories running in parallel, one the present and the other the past experiences of Neerja (good and bad) that she is reminded of, that give her strength in the times of the crisis at hand. I found this approach very refreshing and taut,  rather than having a separate flashback for the backstory.

The pace is fast, nervous and the screenplay is tight. Not once do we get the chance to shake off the tension, and a lot of credit for this goes to the actors who portray the terrorists. They are raw, uncouth and vile – a no holds barred performance that should definitely win multiple awards next season (or given the way Bollywood awards work, maybe not).

The supporting cast is first rate.  Yogendray Tiku and Shabana Azmi play the parents, with Shabana demonstrating her acting finesse especially in the last 15 minutes. The other actors play their parts well, thus completing a well casted movie.

But what about Sonam Kapoor?

Neerja’s heroism was not common. She was not part of any army, nor trained to deal with terrorists holding guns in her face. People would give up for much less, but not Neerja. She demonstrated an extraordinary level of courage, and gave the ultimate sacrifice performing her job and saving hundreds of lives, where such a sacrifice was not expected. She went far beyond her call of duty, and ended up being the youngest recipient of the Ashok Chakra, India’s highest peacetime military award for bravery.

Portraying such a character is no easy feat. Anushka could have done it well, Kangna, for all her acting prowess, may have been slightly miscast. Sonam Kapoor, on the other hand, brushes aside all my apprehensions and delivers her finest performance till date (and I suspect, for a long, long time). It isn’t like this was a flawless performance, but was fantastic nevertheless. I would go as far as to say that Sonam was the best choice for the role. The way she oscillates between fear and strength, trying to deal with situations that no one could have prepared her for, is exceptional. She may not win many awards for this, since its too early in the year to decide, but nominated she will be in all. Sonam – you have just about won a fan…

Neerja is a movie that doesn’t come about so often. And Neerja is a person that one doesn’t come across so often either. Two reasons that are good enough for you to watch the movie, in case you haven’t as yet. Go. Book. See. Love. Revere.