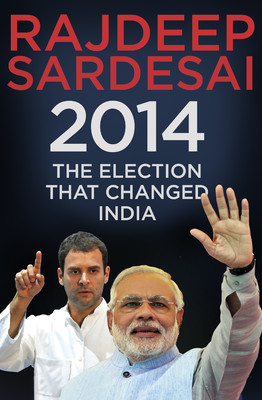 2014: The Election That Changed India by Rajdeep Sardesai

Over 850 million voters, the largest democratic exercise in human history, the grand old party of India led by the scion of a family that ruled most of post-independent India, challenged by one man from humble origins, the first true election in the social media age…the Indian General Elections 2014 had all the elements of a commercial potboiler. For a person like me who closely followed every aspect of this mega event, and enjoyed its twists and turns, this book was an opportunity to recapitulate the moments and to have an insider’s viewpoint on the incidents that led to the buildup, and finally the culmination.

An opportunity well presented…but not quite well utilized.

Rajdeep tries to weave a tale but ends up speaking of things that everyone knew already. There are some instances where he does come out with insights, but they are too few and far in between (one such instance is when he cites Kejriwal’s failed campaign in UP). Moreover, the story is said from his point of view – agreed, since he is the author after all, but then how many people would be genuinely interested in what he thought of the whole thing? Yes, if Rahul Gandhi or Narendra Modi had written about their experiences during this election, I would lap it up gladly. But as it stands, the Gandhi can’t speak and the Modi has moved on into his ’24/7 PM/CEO/Marketing Head/everything in between’ role, and the third (at least he thought he was) player (a certain MufflerMan) would mostly fill the pages with charges against everyone involved in the elections, culminating in a possible charge sheet against himself. And so we have to make do with Rajdeep.

So what do we end up with? As stated before, a bland review that doesn’t do much justice to the blockbuster elections India witnessed. Maybe good for someone who shut off the internet, television and newspapers for the twelve months that preceded the D-Day. For the rest, savor your memories instead.

3 thoughts on “2014- The Election That Changed India – My thoughts”